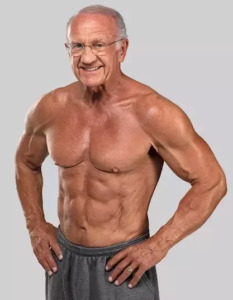 Daniel Craig fresh from working out on set. Sorry this gag never gets old, unlike Craig. 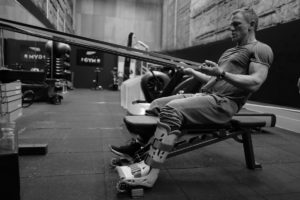 EON released the preceding photo on their Twitter account a few days ago, I’m assuming to assure everyone Dan hasn’t fallen off his special muscle “supplements.” Unfortunately all it did was bring this image to mind. 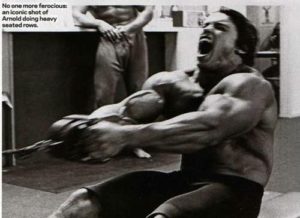 So I guess Bond has gone full Schwarzenegger, pumped, inflated and engorged beyond recognition. Only the veins bulging from his neck remind us he’s human rather than a terminator. Too bad Craig hadn’t put that much work into his ankles rather than his forearms! Speaking of forearms, I’m glad Craig made sure to wear his Omega™ watch on his. You don’t… No… You don’t suppose this photograph was staged do you?!

The comments on this tweet were pretty much split 50/50 between “Best Bond Eva!!!!!!!!” and “What happened to his foot?” So EON’s Twitter feed is equal parts sycophantic shills and folks barely paying casual attention to the on set shenanigans.

I don’t care how ripped, yoked or buffed he gets, it’s not bond. Even if you go by the former military special operator in a tux template the modern Bond has become, his exaggerated physique is incorrect. Look at the U.S. Navy SEALs the American archetype for this incarnation of the character, they are certainly fit, very fit, but none of them would want to lug the 20-30 extra pounds of dead weight those chemically (allegedly) swollen pecks and biceps represent on a mission. 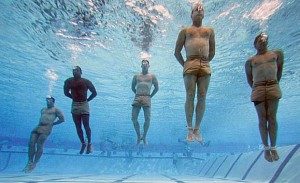 Here SEALs are conducting “drown proof testing” not a lot of excess muscle floating around is there?

All of that aside, it’s not what Fleming (remember him) imagined for the character. Fleming’s Bond was a naval intelligence officer not a commando. Fleming had an insider’s knowledge of such operations having planed a few during the war, yet chose to place Bond in intelligence rather than make him a front line operator. Of course Bond got into physically taxing adventures causing him to test his athletic prowess, but it’s mostly his wit and tenacity that sees him through. So pumping the starring actor full of steroids (allegedly, I mean how else can a 51 year old get so immense), does not fulfill the “realistic” or “back to Fleming” mantra that EON and their lackeys have been intoning since Craig was cast.

In other news of malingering. Director Cary Funknwagnels has been accused of slacking off on set, I said slacking get your mind out of the gutter. That would be another individual who set up hidden cameras in the women’s bathrooms on the Bond 25 set! Back to Cary Funkadelic, the wunderkind spent three hours playing video games rather than doing his homework, I mean his job, to wit helming the Titanic. Care bear’s little gaming session supposedly set the crew back so badly they were required to work through the Father’s Day weekend, many of whom refused, sparking a call of Mutiny on the Bounty. Once done, this film is shaping up to be a real Action/Poseidon Adventure… Lusitania! Sorry couldn’t think of a witty way to work it in.

The great director has addressed the rumors concerning his video game habit. Funny how Cash n Cary doesn’t deny a delay, just that his need for virtual stimulation had nothing to do with it. He offers as evidence, the fact his completion progress for video game Red Dead Redemption 2 has been holding at 63% for the past few months. No word on how far along he is on Hitman or Assassin’s Creed though.

In news from the realm of thanks but no thanks, apparently you can win a visit to the set of the Hindenburg with the anointed one himself!

He calls the set “highly confidential” I guess you can’t get more “confidential” than nonexistent! On your tour you’ll get to see “iconic Bond locations” on the grounds on Pinewood Studios, like the set that recently exploded, or that vacant lot over there where they built Blofeld’s volcano used in You Only Live Twice, or that lot there where they built Fort Knox for Goldfinger. Vacant lots because those temporary sets were knocked down as soon as filming wrapped, but hey here’s an empty soundstage where we may get around to actually filming something someday! Of course I know there are a few spots on the studio grounds still standing from the films, most notably appearing in From Russia with Love; however they are few and far between because Bond is known for its location shooting.

That was some witty banter among the two “stage hands” in the background of that video, but you’ll notice who they don’t mention in their “best Bond chat” other than Craggy of course, I’ll give you a hint, starts with Bros ends with nan. Even Dalton was mentioned, how quickly they forget, get used to it Dan. The biggest thing I take away from this little videographic vignette is how personable Craig comes off. Who knew he had another setting than ROID RAGE. You certainly wouldn’t know it from his work on Bond! I guess old Craggy can act! If he can feign this much excitement and enthusiasm over a role he’s specifically said he wants to abandon, maybe he really is “the best actor to play Bond.”