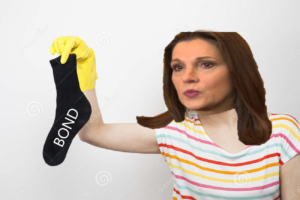 So Barbera “Babbzy” Broccoli and her half brother Michael G.asslight Wilson gave an interview to film industry rag Variety recently, stating Bond like men in general need to evolve and addressed the future of the series including their search for a new actor to fill Dan Craig’s rather tiny shoes. 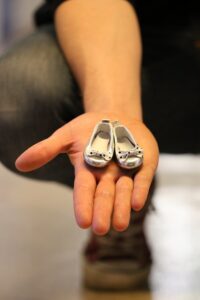 I have a few take away’s, the article starts by stating the dimwitted duo are “busy preparing for the 60th anniversary of Bond in October.” Yes, I’m sure they are, those vacuous re-tweets aren’t going to post themselves! 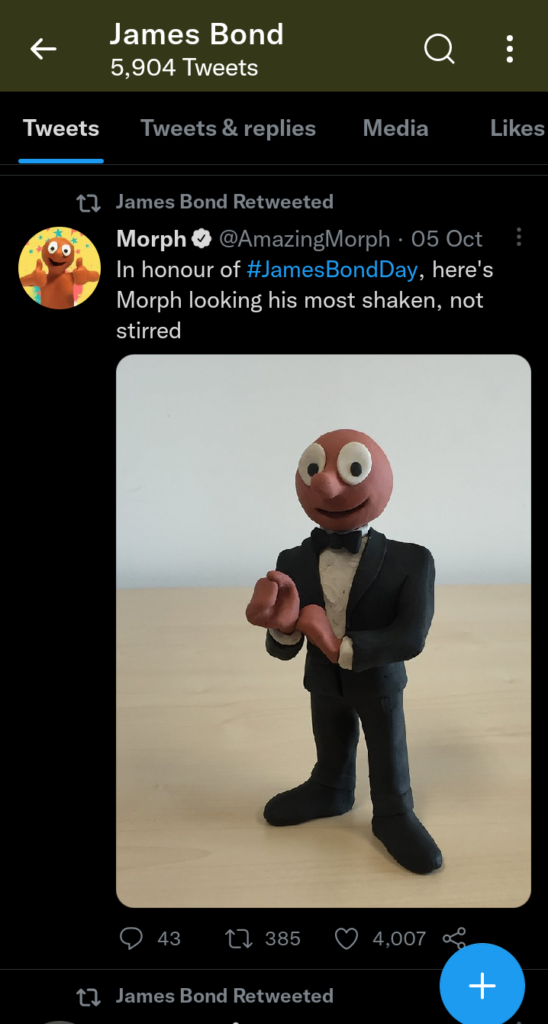 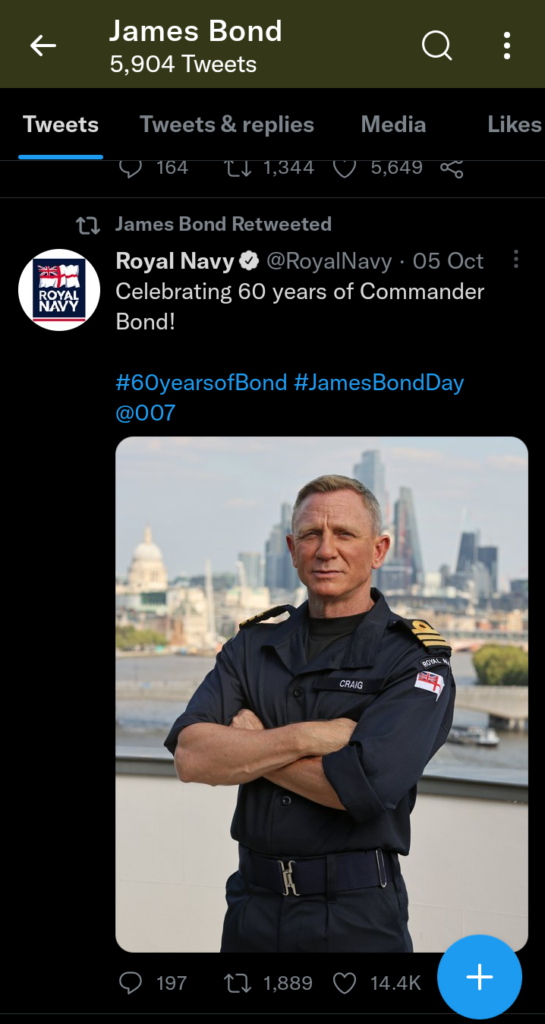 Through the course of the interview the media’s number one choice for the role Idris Elba is brought up, to which they respond:

“The thing is, it’s going to be a couple of years off,” she notes. “And when we cast Bond, it’s a 10-, 12-year commitment. So he’s probably thinking, ‘Do I really want that thing? Not everybody wants to do that. It was hard enough getting [Daniel Craig to do it].” Wilson interjects: “And he was in his early 30s at the time!”

So what your saying is, Idris who just turned 50, is too old for the part? I totally agree, but they can’t come right out and say that as Twitter has decided saying so is some sort of “racist, ageist alt-right dog whistle!” 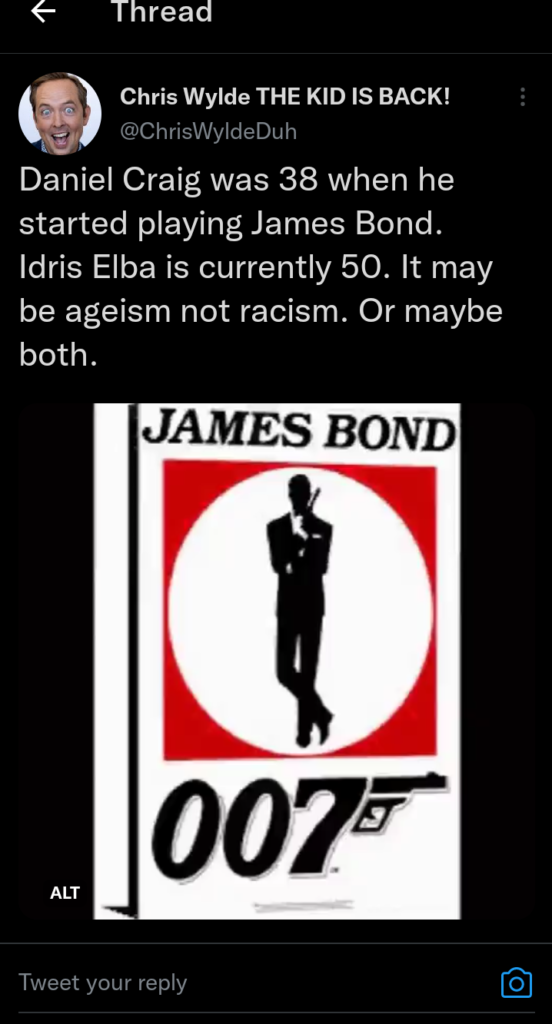 That quote from Wilson is also telling as Craig was 38 when he filmed Casino Royale hardly “early 30’s” which means they were wooing him for the better part of a decade. 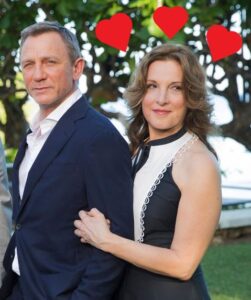 The author continues with:

“Well before the star’s last turn, however, speculation was rife about his replacement, and Broccoli and Wilson have already been fielding questions about the franchise’s next chapter for years.”

That my friend is because everyone had grown extremely tired of the brooding, po-faced old sour puss by that point. 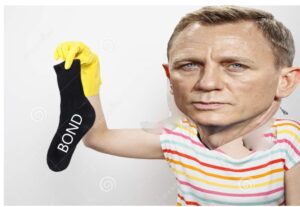 “I’m sooo much better than this!”

The author further points out:

“Both Wilson and Broccoli, who is a director of the U.K. chapter of women’s advocacy org Time’s Up, have left their mark on Bond, particularly in humanizing the once-womanizing spy and ensuring more fulfilling, meatier roles for the female stars of the franchise. These are qualities that will continue in the next films, says Broccoli.”

When? Honestly Mrs. “Time’s Up,” when are you going to write meatier roles for women? (For a deeper dive on the subject; Here and Here) How is Lea Seydoux’s Madeline Swann any more “fulfilling” than Diana Rigg’s Tracy Di Vicenzo? Is it because she was a psychologist rather than a Countess? Cuz it sure wasn’t in the character development! And Seydoux’s character was the most fleshed out in the recent films! Looking back over the past 5 films is a dearth of female development, we had female 007 who was a dud, Monica Belluchi’s much ballyhooed “Bond woman” was sexually assaulted by our hero, far more so than anything seen in the early films, Berenice Marlohe’s Severine had about 5 minutes of screen time before getting murdered as the Craig-Bond sat on his hands and don’t get me started on how they lobotomized Mrs. Moneypenny! Let me ask you what’s better, being the world’s greatest administrator or a trained spy who is so inept she has to hold down a desk and field the boss’ phone messages? 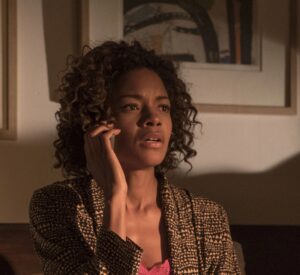 “Hello, thank you for calling MI-6 your call is important to us…”

“People have always come to us about doing a TV show, [saying,] ‘Oh, you should do a Bond challenge,’ but we always stayed away from it because we didn’t want to put people in danger and have them do dangerous things, because it’s not for members of the public — it’s for trained professionals,” explains Broccoli.”

Ah yes, if it’s one thing rival race-around-the-world show The Great Race is famous for is their notorious safety record! I can see how you wouldn’t want to expose contestants to perils such as zip lines and roller coasters, things the average tourist subject themselves to everyday. 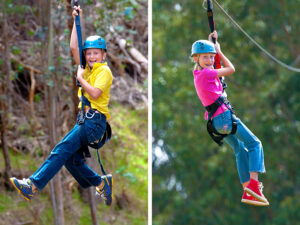 “Broccoli and Wilson are producing the eight-part series alongside 72 Films and MGM Studios (Amazon). The show is now in production and “it’s looking really great,” enthuses Broccoli.

“Audiences will get a big kick out of it, and that’s why we agreed to do it,” she says. “I mean, it surprised us as well as everybody else. Like, wow, we’re gonna do this.”

Yes, I imagine she was absolutely astonished when Amazon shoved it down her throat!

“News of the show emerged just a week after Amazon closed its $8.5 billion deal for MGM in March, with the Bond franchise believed to be a powerful driving force behind the acquisition.”

See what I mean?!

Trying to assert their control on the franchise the siblings continue:

“When the proposed deal was first announced in 2021, Broccoli and Wilson were quick to extinguish any speculation about a streaming play for Bond, and issued a statement assuring audiences that the movies would remain in cinemas. (Even in this interview, when asked whether Amazon might ask for a narrative Bond TV show, Wilson notes, “We’re trying to keep it theatrical,” and Broccoli swiftly retorts: “Well, we’re gonna keep it theatrical. We’re not going to try; we’ve got to do it. It’s just a theatrical franchise.”)”

No Babz, your brother is right, you are trying! The fact you’re airing this dirty laundry in public on a venue dedicated to industry news confirms you’re trying to send a message to your new overlords. Don’t believe me? She continues:

“But the greatest shock around the Amazon takeover, they say, was the sudden departures of MGM film bosses Michael De Luca and Pamela Abdy in April.

“It was a real blow when we lost Mike and Pam,” says Broccoli warily. “I mean, that was just — you know, we’ve had a roller coaster ride over the years with MGM and United Artists and all that stuff, for many, many years. There’s been a lot of ups and downs and we were so happy with their leadership and so looking forward to smooth sailing. And then a hurricane came and things changed.”

Aw, your submissive collaborators were shown the door?! You mean somebody may actually hold your feet to the fire? I imagine that is what Amazon plans on doing, while EON do have complete control over the Bond character and I’m sure could potentially veto any project Amazon wants to produce, Bezos does hold the purse strings! Since time immemorial MGM/UA paid the bills EON racked up making their films, without those deep pockets EON doesn’t exist. 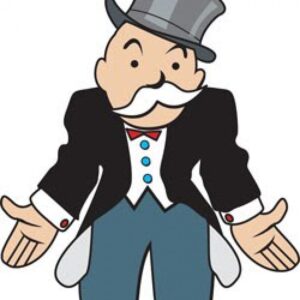 Now don’t get me wrong I have absolutely no hope Amazon will improve the quality of the francize just perhaps the quantity. Look no further than the Lord of the Rings series Amazon is currently airing. Honestly I’m not much of a “Rings” fan so I don’t watch it and can’t comment with any real authority on the quality of the show’s writing, however some very serious people whom I take very seriously on this subject have called it a dumpster fire, so I can only expect more of the same from Bond going forward. 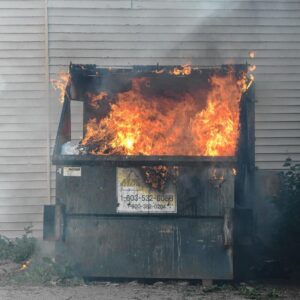 James Bond brought to you by Amazon!

Finally we have the titular comment concerning where they are going with Bond in the future:

“It’s an evolution,” she says. “Bond is evolving just as men are evolving. I don’t know who’s evolving at a faster pace.”

Craig, she adds, “cracked Bond open emotionally,” bringing audiences into the character’s inner life. “The films over his tenure were the first time we really connected the emotional arc.”

Bond has “evolved” all right, evolved into a pile of shit!

This site is not the only ones to notice, none other than the followers of super fan site MI6-HQ are chafing under the yoke of “emotional Bond.” 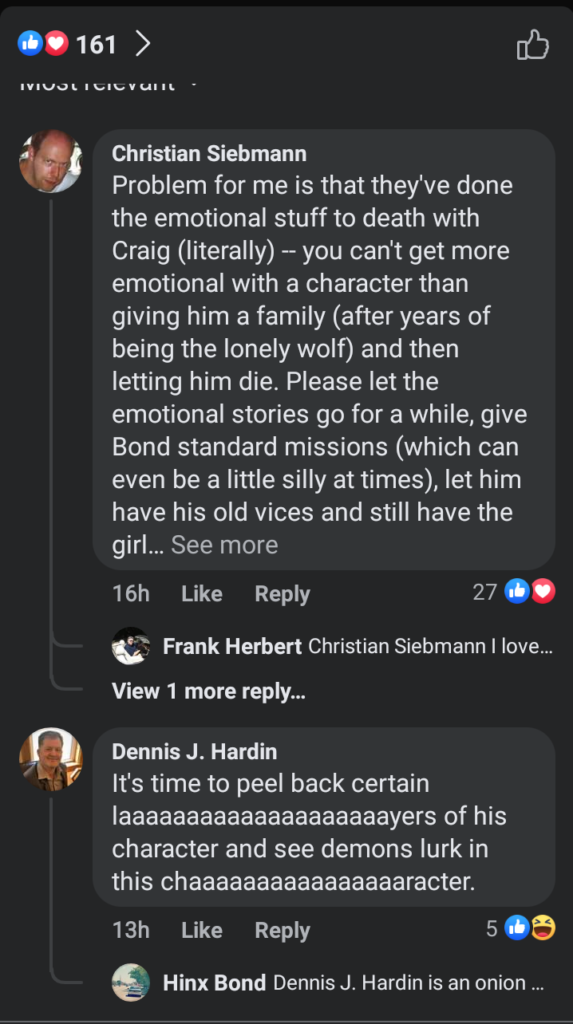 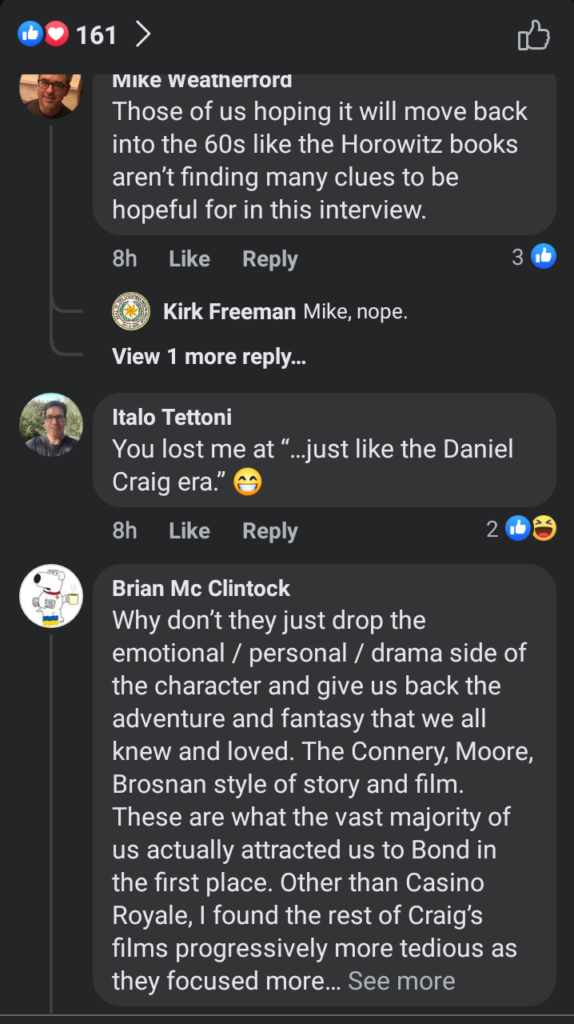 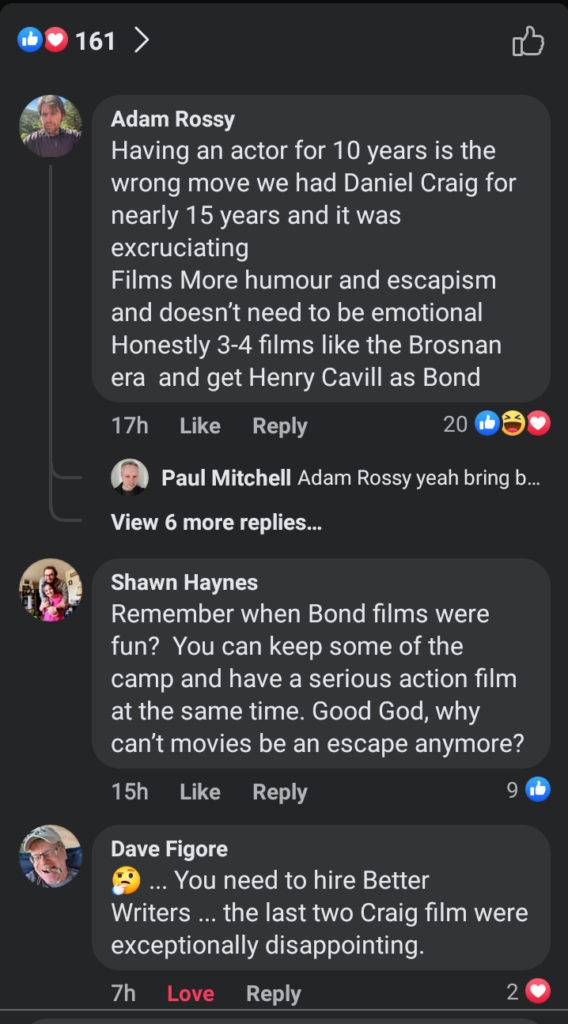 Babbzy, look at me, look into my eyes… 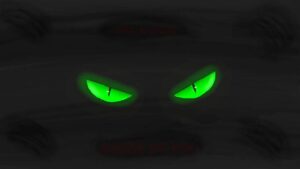 …seriously pay attention, you are at a precipice here, I’m not saying this for my benefit, my fandom for this property is all but done, barely hanging on by a severely stubborn, ever unraveling thread, if it finally snaps I’ll finally be free. So personally I’m not too concerned, I’m telling you this for your sake. Stop this insanity of reinventing the Bondian wheel to appease the intelligencia in Hollywood, they don’t care about James Bond, you or your father’s legacy, they just want to push their own agenda. Then again considering your comments, “their” agenda is yours.