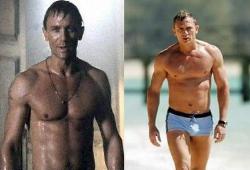 Because a day without Daniel Craig feels so empty:

Talk us through this one again, please: how does a guy
buff up from Exhibit A (shower scene from an obscure
2001 movie called Tomb Raider) to Exhibit B (pastel
gay briefs on location in the Bahamas for Casino
Royale) when he has the athletic fighting skills of a
ballerina, keeps the biathlon training routine of Michael
Moore, is endowed with the natural body strength of
Lindsay Lohan and enjoys the masculine world of
automatic car racing? Or are we simply to assume that
Lance Armstrong’s “fitness coach” found a gig for his
needles in Hollywood?

In other Daniel Craig bullshit news this day, crew
members on the set of Casino Royale claim the James
Bond actor has requested “nail fills, baby lotion and wet
wipes” to be delivered to his trailer. For those in the
know, that’s exactly what Al Pacino asked for to get in
character while shooting the last scene of Scarface. So
it looks like our favorite bi-monthly, Macho Torso, was
right: manicure is definitely the new badass look this
summer.

Then there’s this news, which, in true British tabloid
fashion, is verified, confirmed, and triple-sourced:

[…] There is nothing ladylike about Dan’s body – according to
two women who broke into his trailer when he was naked!

Dan is sure to have got the fright of his life when the pair got
a glimpse of him cooling down from the heat in the Bahamas.

The actor has now apparently been give the nickname Big
Willy after the two women started rumours of his big talent.

If you look in the Webster’s for the definition of “easy”
it says “bimbo trash who breaks into a D-list actor’s
trailer” and here’s why: there are pictures of Mr. Naked
Craig going around the Internet, and as part of our
thorough investigation of the man, we have subjected
ourselves to them. Again, we insist, purely in the name
of blogging. And because we managed to stop laughing
about 3 days later, we’re able to tell you that “big” is a
word that should not be written in the vicinity of Craig’s
name. Saying Daniel Craig has a “big willy” is like
saying Danny de Vito is built like Shaquille O’Neal.
Don’t make us show you the pictures.