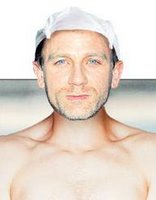 In the eternal words of Maddie Hayes reprimanding
David Addison in Moonlighting: “Just when I think
you’ve gone as low as you can go, you find a basement
door!”

JINXED James Bond star Daniel Craig has been hit by a nasty
bout of prickly heat.

He suffered sunburn while topping up his tan before filming in
the Bahamas.

New 007 Craig wanted a healthy glow for the movie, but
ended up James Burned — and now can’t stop itching.

A source on the Casino Royale set said: “It’s driving him mad.
He constantly wants to scratch. It’s worst when he does a
costume change. He is in agony.

So Daniel Craig can’t beat a stuntman in a
choreographed fight sequence but somehow he thought
he could take on the sun without suncream?

Next, Daniel gets blisters and can’t hold a gun, of which
he’s afraid anyway. Then he goes blind, so his lines and
directions have to be delivered to him directly through
an earpiece as he shoots a scene. (We let your wicked
minds imagine how he both goes blind and develops
blisters). Driving is done by another stuntman because
he’s such a little diva, he can’t drive a stick shift Aston
Martin.

As you can tell, we’re easily running out of jokes and
patience for Daniel’s stupidity. At least when Ann
Coulter insults people or Hillary contradicts herself for
the nth time, it’s slightly amusing. Even Alec Baldwin’s
word dyslexia is briefly entertaining until you meet his
chest carpet. But Craig is always more of the same. Like
a whining baby. You change his Pampers, he spits on
his singlet. You change his singlet, he craps over his
Pampers all over again. Really, it’s not easy.