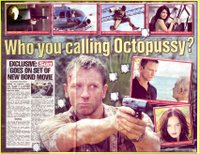 We kid you not. Every time we write something about

Daniel Craig we think, that’s it, that’s the last time we
mention him. It can’t get worse. But the guy keeps
coming back and asking for more. In today’s
installment, Daniel Craig muses on being a thespian, a
millionaire and a movie connoisseur:
“I never really wanted to do James Bond.

“Don’t get me wrong, I want to make big movies and I want to
make as much money as I possibly can, but there’s not a
tremendous emotional challenge.”

[…] “It’s a dodgy place to be walking. I don’t really want to
get the rap for destroying that franchise. […]

“Timothy Dalton was great in the part but I think the film
makers tried to take the franchise in the wrong direction and
he got the rap for that.

“I think George Lazenby got the rap too. I think ‘On Her
Majety’s Secret Service is one of the best movies.”

On Her Majesty’s Secret Service was quite a good Bond
actually; it had the strongest female lead in the
franchise’s history and an ending we’ll never see again
in a 007 movie. But it had one slight little problem
when you’re familiar with James Bond films: it lacked a
lead actor. As to Timothy Dalton, we never understood
why he never got an Academy Award for License to Kill.
He was a natural. Much like 50 Cents would be if he
portrayed a Hasidic Jew shop owner in New York’s
diamond district.

But, we give back to Caesar. At least Craig has the
honesty to say he does it all for the money. Not like
Johnny Depp who claims he’s just an artist and openly
rejects responsibility for a movie’s boxoffice all the
while demanding $20 million paydays.

That’s it. That’s the last time we mention Daniel Craig.
“I never really wanted to do James Bond.” It can’t
possibly get worse.