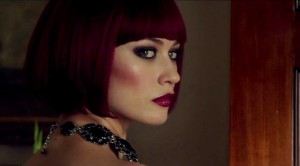 Our members in the territories where November Man was release have given us some feedback. For the most part they agree with the CinemaScore B+ rating and they agree a sequel would be worthwhile.

Appears there are Bond references to go along with the former Bond and Bond girl starring in this picture.

Discuss this in our forum

bjmdds: To sum it up:”Murder at 1600″ meets “24”, as Olga Kurylenko (Highlight for Spoiler:) reprises the same role as in QOS

I thought the movie was very good and Brosnan did a nice job in the process. We all thought it was a quick paced fun film to watch. The plot gets a little complicated at times but if you pay attention you can keep up with it. Those critics that maligned it are morons. 16 people were in the theatre. It’s not getting a big enough audience because Brosnan failed to do the talk show tv circuit to promote it probably because there are mostly reruns on in August. It deserves a sequel and I enjoyed it more than ANY Cr-egg Bond film, and it looked like the Bond-ish film Pierce always wanted to do.

Omega:   Went to The November Man worried it would suck. Despite all the mediocre reviews on RT NM is actually done pretty well.
At it’s heart NM is a movie made for Bond fans stuffed with subtle and not so subtle Bond references.

Of the complaints I’ve read I’d say only a few a warranted. Most IMO are the over critical for the wrong reasons, it’s a spy movie, so it follows the pattern spy movies must follow. It didn’t reinvent Spy movies but it does make a good entry.

Someone complained about the score it didn’t bother me, I wasn’t blown away by it but it wasn’t distracting either. Brosnan is good as an older agent coming back, in some way I though his action was better than some of his Bonds, it didn’t go over the top but the close quarter combat was believable for a older man to pull off.

Remember Olga Kurylenko character from QOS (Highlight for Spoiler:) well her she actually makes sense and is someone you feel for and cheer for. (odd AFAIK this is the third movie I seen her in where she doesn’t become romantically involved with the lead, QOS, Max Payne, and this)

I have two complaints one is the stormtrooper/clone/droid mentality for killing agents, standard for spy movies, shoot up KGB and CIA agents and nobody cares. My other complaint is a spoiler.

Brosnan is not Bond, this spy is colder and meaner than Bond. In an odd way more vulnerable to.

Bottom line I enjoyed it and hope they make a few more of these. I’d really like Dalton to make a similar move as well.

FormerBondFan:  I went to see NM the second time yesterday. While I said that it was great the first time I saw it, the bad reviews are trying to harden my heart during the viewing so it takes a second viewing to enjoy it a lot more. I did that by ignore those critics. Plus, the increased ratings on IMDB made the movie more enjoyable for me.
Anyway, let’s talk about the movie. First things first, NM is not James Bond nor that it attempts to be, but it is Pierce’s return to the action genre in a decade. It is good that he is not Bond in the movie (after all, he is a versatile actor). However, Pierce’s portrayal of the title character is something we could have seen in his Bonds if EON had given the creative freedom he needed in terms of the dark and gritty side. If I must say, Pierce as NM makes Tim’s Bond look like a Sunday school teacher. Also, bits of the background music has some Bondian feel it as though that it could fit in a modern Bond film. The action is well paced. It’s not over-the-top, and it’s quite low scale. It’s the first of the planned series. What do you expect? Look at DN. The action wasn’t as intense compared to some of the Bonds that came afterwards.
Overall, I enjoy it a lot more than the first time around. Is it a masterpiece? No. Is it Oscar-worthy? No. Besides, the Oscars’ a joke anyway, but that’s a whole different story. As for the rank of NM in terms of Pierce’s works, I would say it’s just as great his Bonds though sometimes I would rate it a little higher than them mostly because it’s a low-scale actioner. If NM was made into a higher scale, I would rate it much higher, but in the old saying, start off small then work your way up. That’s what NM just did………in a similar way DN did for Bond. That being said, give us the sequel.