Whilst in Prague accepting the Crystal Globe Award at the Czech film festival Dame Dench made the rounds charming everyone in attendance. She even made to time to socialize with the ‘normal crowd’, something she didn’t have to do as a VIP guest. It is the kind of classy move we have become all too accustom to from our Bond stars, but then Dame Dench is one of this old school fans favourites. 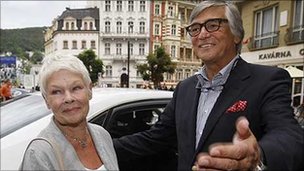 Saturday evening (2/7/20111) at the festival press conformance Judi was as you’d expect pressed for details about the as of yet untitled Bond 23. Her answer was flippant if not jovial however it bears consideration. When asked about Bond what she said was this:

“I can’t tell you any single thing about it,” she said. “I’m not allowed. You take a little vow. When the script was delivered to me, it was delivered by a man completely dressed in black. He just gave me the script and left. It’s very secretive.”

Now keep in mind this is nearly identical to what she said a few months ago when we know the script was not near finished let alone delivered to her. Judi has a habbit of being a good spokesman for the franchise and to her credit has always been good to the fans (with one exception of course 😉 ). In 2005 she reassured fans concerned over casting rumours that Pierce Brosnan would be back for his fifth film (as EON films had promised in 2002).

“Despite the fact that everyone on the face of the Earth has been tested as his possible replacement, he’ll be doing it again, and it’ll be announced come summer.” -Judi Dench, April 2005

‎Why are we taking note of this last weekends seemingly insignificant PR fluff, well to answer my own question if it is true this would actually be a huge step forward in Bond 23’s production. Last we heard about the script was from John Logan in an interview where he said he had not yet started work on the first draft and that was back in the beginning of April (2011). Since then it has been very quiet in they way of official news, sure a few rumours of filming location and perhaps a stunts or two have surfaced, the standard tabloid generated stuff really.  But real confirmed news with a smattering details of the plot or casting or locations have not materialized. Although Sony and MGM have confirmed a release date for October 2012 for the UK and November 2012 for the USA, and there has been confirmation of a slashed budget in comparison to Quantum of Solace alluded to by other press releases from the studio.

We would actually be very pleased if the script is finished and making its rounds to the stars was we speak, as we would like them to get on with the 3rd Craig movie, get over it,  and then move on to making James Bond movies again!