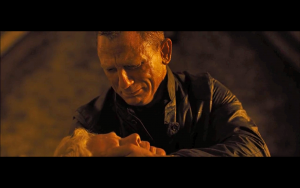 Since I spoke on the Craig villains last rant I thought I’d flip to the other side of the coin and talk about the man himself. In the old days Bond always won in the end… that is until Craig came along. Now some may see that as “gritty realism” or “vulnerability” in Craig’s character, but in reality it just goes to prove the creative nihilism in the series as of late. You see if the hero doesn’t win, then what is the point of the story? Exhibits A through D:

Craig’s mission is to bankrupt Le Chiffre thus causing him to defect and spill the beans on his organization. Craig does in fact bankrupt Le Chiffre however he is killed before any information can be gathered thus Craig’s first failure. In the end of the film the money is recovered by the evil organization, recall Mr. White walking off with the briefcase. So what was the point? Remember all that harping on by Vesper “Have you given any thought to the notion if you lose our government will have directly financed terrorism?” Well he may have won the card game but terrorism was financed none the less. Before you start screaming “Fleming” as this was based on his novel, keep in mind Bond’s mission did not involve turning Le Chiffre, just breaking him and his organization, the money was turned over to the government. The only loss Fleming’s Bond experiences is Vesper’s suicide.

The film starts with Craig bringing the enigmatic Mr. White from the previous movie in for questioning. During interrogation M’s bodyguard shows his true colors and frees White in a hail of bullets. Craig runs off after the crooked agent leaving White to escape, failure #1. Once he catches the corrupt operative he kills him losing any chance to acquire information failure #2. So, because of his cock ups Craig is assigned a mission to find out all he can about the mysterious “Quantum” organization. Instead he goes off on a rampage, killing any and all half-witted thugs he can get his hands on rather than interrogate them failure #3. The fact he learns anything at all is sheer happenstance when the desk clerk at the hotel where he commits one of his murders bizarrely confuses the Craggy one for his decidedly non-craggy victim, thus prompting her to give him a briefcase.

Once he has the case he is suddenly and inexplicably picked up by a gorgeous woman who must have mistaken him for a polar bear and fearing for his safety in the warm South American weather, sought to get him to cooler climes. In the car Craig figures out the man he killed was meant to kill this woman and rather than clearly impart upon her he is on her side, he somehow manages to lead her to believe he is the assassin, failure #4.

Craig follows the woman and through a series of unfortunate events the woman is handed off to a despotic rapist. Craig takes action to rescue her and after a drawn out boat chase during which she is knocked unconscious Craig just drops her in the arms of a hotel concierge without even considering this woman may have valuable information, if the woman was worth following why isn’t she worth questioning? Constituting failure #5.

Craig jets off to Austria in pursuit of his quarry, but not before calling M and telling her nothing of consequence. In fact, all his brief immaterial phone calls do is anger the head of MI6 and rightfully so, failure #6. This causes her to cut off his financial account (like punishing a petulant child) and requires him to run to Mathis in order to bankroll his impotent raging. Several mistakes later and he’s discarding his friend into a dumpster.

Finally after failures #1-6, M makes her way to South America to see just what the bloody hell is going on. This leads her face to face with her failure, that was sending a 98 pound 20 something female fashion model to turn back a rogue fugitive 00 agent to London. The outcome being she gets drowned in oil or is it chocolate syrup and posed on a bed like Jill Masterson from Goldfinger, that was the film maker’s mistake.

After nearly getting himself incinerated by trapping himself in a burning hotel room, he apparently does question the leader of the organization off camera, before sending him to die in the desert, but wouldn’t it have been more advisable to bring him in and hold him, should any other questions need addressing? Failure #7. Furthermore his vengeance sub-story falls flat because when he finally does find the man who ultimately betrayed Vesper, his one true love, he walks away letting him live, failure #8! I thought the whole point of his blood soaked rampage across half the globe was to get revenge against the man who destroyed Vesper? If Craig spared him for information, why not do so with the half dozen better connected men he killed, which included Greene who was one of their ring leaders?!

First Craig is tasked with protecting then ultimately retrieving a hard drive full of western agents stolen as the movie opens, not only does he fail in this endeavor, but decides to celebrate this failure with an unauthorized holiday sulking at some third world beach resort gambling on scorpion based drinking games.

After returning he fails all of his physical/psychological exams, he’s then sent to China to find the man responsible for an attack on MI6. Here he stands by and watches while a man is murdered, then drops the murder, his only connection to the villains, off a skyscraper. After a woman agrees to assist him, Craig blunders up on deck of the enemy yacht he was stowed away on. Craig is shocked to find his presence is none too appreciated when the crew binds and brings him before Silva. After some light homoerotic fondling and stilted dialogue, Craig does in fact achieve his objective, capturing Silva, but only after allowing him to kill the woman who helped Craig get there. A woman Craig could have saved had he acted only 30 seconds sooner!

Most importantly however Craig buggers up his biggest assignment, protecting M! After saving her from an all-out onslaught in the secure confines of parliament, he figures the best course of action is to run to his abandoned ancestral home. There he intends to set a trap for the amazingly well connected terrorist with the added benefit of not bringing along any back up what so ever! They’re leading Silva straight to themselves but also making sure the authorities have no idea where they are! Why is it impossible to send in the Royal Marines behind them?! Amazingly, playing Home Alone isn’t as effective against a force of two dozen heavily armed men as one might imagine, resulting in M’s death! All that rigmarole over two hours to ultimately end up for naught!

The Spectre of Failure:

I guess in all fairness the only instruction Craig received in this film was to “Kill Sciarra and attend the funeral” which he did only after blowing up a city block and nearly letting him escape. I guess the real failure in this film is the plot. Craig goes rogue all over Europe destroying all manner of public, private and government property along the way. Craig eventually sashays straight up to the front door of Brofeld’s lair, not learning his lesson from SkyFail he once again proceeds without a shred of back up, unless of course you count his psychologist girl toy and her ability to talk people to death. This Causes him to get caught and tortured for the third time in four movies! If not for some ridiculously bad film making, featuring the most inept guards in the franchise, coupled with the most fragile exploding pipes ever captured on celluloid, Craig would have never escaped!

In the end Craig does manage to blow up Brofeld’s refuge, end his scheme to intercept everyone’s private sext messages and lands Bro into custody (at least temporarily, until Bond#25 that is). So perhaps he finally did complete an objective?!