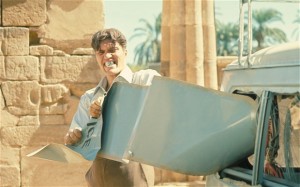 Richard Kiel a giant of a man with a heart just as big has passed away at the age of 74. He was only in two Bond movies (“The Spy Who Loved Me” & “Moonraker”) however his impact was far greater making him a icon of the series.

It is rumoured Bond 24 producers are looking to emulate the Jaws character Richard brought to life however we are sure they feel as we do that Richard is irreplaceable.

Our condolences go out to his family and friends.

Special thanks to Problem Eliminator & Kater23 for posting the story.

Discuss this in our forum.

Actor Richard Kiel, who starred in two James Bond films as the steel-toothed villain Jaws, died today. He was 74.

The 7-foot-2-inch actor was best known for playing the Bond villain in 1977′s “The Spy Who Loved Me” and 1979′s “Moonraker,” but a new generation got to know Kiel from his role in 1996′s “Happy Gilmore” as Adam Sandler’s adversary turned ally towards the end of the film.

Kiel was recently treated at St. Agnes Medical Center, according to the Associated Press. His cause of death was not released.

His representative Steven Stevens called him “a giant actor, a giant man, [and] a giant friend.”

Sir Roger Moore has said that he is “totally distraught” at the death of his James Bond co-star Richard Kiel who has died aged 74.

Kiel, who played steel-toothed villain Jaws in two James Bond films, appeared with Sir Roger on BBC Radio 4’s The Reunion only last week to talk about the films.

Sir Roger, 86, said: “I am totally distraught to learn of my dear friend Richard Kiel’s passing. We were on a radio programme together just a week ago. Distraught.

Kiel, who was 7ft 2in tall, died at a hospital in California.

The next James Bond movie won’t be out until November 2015, but the pieces are starting to come together. Slashfilm reports that a recent casting call for Bond 24 says the filmmakers are “looking to follow in the tradition of JAWS and ODDJOB in finding an iconic baddy” — referring to the memorable henchmen from The Spy Who Loved Me and Goldfinger.

The villain — named “Hinx” — will be male, aged 30 to 45, and ideally over 6’2″. “We are looking for an imposing extremely physically fit actor,” says the casting call. “He has several fights with Bond and will have to have stunt training. He has to drive. We are looking for someone very unusual, possibly from a sports background.”