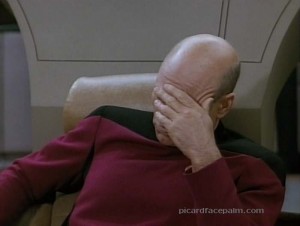 I thought I was far too optimistic with the last headline (re: Calling it Quits), and indeed there was some walk back, along with the expected undying support from EON (poor Babara always a bride at the alter waiting for her 007.). Craig has a mammoth payday from SPECTRE ($24million (£15.66m) for acting, around $6million (£3.82m) for endorsements and $30million (£19.58m) if the financial projections are on course.) with only a bigger payday to be expected from his last contracted movie Bond 25. So there is every reason for him to stay from a financial prospective. Then there is the fan adulation along with the critical acclaim for turning Bond on his head.

Yet somehow it may not be enough.

Can you imagine doing another Bond movie?
‘Now? I’d rather break this glass and slash my wrists. No, not at the moment. Not at all. That’s fine. I’m over it at the moment. We’re done. All I want to do is move on.’

You want to move on from Bond for good?
‘I haven’t given it any thought. For at least a year or two, I just don’t want to think about it. I don’t know what the next step is. I’ve no idea. Not because I’m trying to be cagey. Who the fuck knows? At the moment, we’ve done it. I’m not in discussion with anybody about anything. If I did another Bond movie, it would only be for the money.’

Do you care who plays Bond after you?
‘Look, I don’t give a fuck. Good luck to them! All I care about is that if I stop doing these things we’ve left it in a good place and people pick it up and make it better. Make it better, that’s all.’

Already some are making excuses for this, ‘the poor dear is just so exhausted he need to rest and come back to the question later’. I understand it is physically exhausting to play 007, eight months or more of globe trotting to film the movie. Maybe a few months to the build up of production. Evey Bond Actor has lost a year of their lives working on each Bond movie. So do many Television actors, Doctor Who for example. It is part of being successful in their chosen field. Most of the rest of us funding these movies with our hard earned money, working each and every never getting the glamour, big paydays, adulation, or fame, somehow we manage to get up in morning and go about our day as little cogs making their world work.

Craig’s attitude is beyond insulting in so many ways. A slap to the fans, a slap to the franchise which took him from obscurity making him rich along the way. Craig has never like the job nor the character, he managed to fulfill Barbara Broccoli’s design to gut the franchise making it more acceptable to the right click in Hollywood who never truly liked 007 to begin with.

To keep Craig on board she (Ms Broccoli) kept jumping though rings of fire, gradually allowing him more and more input and control over the series culminating in a co-producer title.

After she cast Craig as 007 there was a back lash, sites like this cropped up and she had to literally fight for her life as head of EON and justify her choices, for her there was no choice but to double down. Craig on the other hand after his first movie (CR) was ready to move on, they had to go back and renegotiate his contract to get his to show up for QOS. Again Ms Broccoli had no choice she couldn’t be seen as having hired the next Lazenby or Dalton. Almost every recent movie production ends with a renegotiation to keep Craig happy enough for him to return.

In one way Craig has earned the right to demand it with Skyfall Box Office, still it was not Daniel Craig who drew those people in it was the franchise of James Bond which facilitated the resulting Box Office. For the money he is paid, the fans if not the companies/studios he works for deserve a little consideration.

Given his attitude towards the role which took him from obscurity it is high time for Craig and the franchise to part ways. I have no illusion Craig’s departure would mean the Emo Soap Opera Bond era is over, indeed it may get worse, with possibly a worse choice for Bond getting the nod as well, still it’s it time for Craig to move on. Not because of any of the reasons I want it to be for but because the franchise needs it.

Some interesting stories and links on the subject below. Special thanks to James for the stories.

DANIEL Craig has sparked controversy by claiming he would rather “slash his wrists” than play James Bond again.

The actor is currently promoting the eagerly anticipated Spectre, but has made it clear that this will be his last Bond film.

Please can we have the fun James Bond back?

So, Daniel Craig is threatening to wash his hands of James Bond.

In widely reported news this morning, the 47-year old said he would rather “slash my wrists” (and presumably his contract, which runs for another film) than play 007 again.

Comments from aintitcool.com’s coverage.
“Craig’s London thug take on the Bond character was cool and refreshing for one movie but it got old really fast with Quantum of Solace. His character is way is often too brooding and charmless. Then there’s the repeated “Bond gone rogue” storyline over and over again with a pessimistic theme song that’s either about death or the end of something (and someone please put Sam Smith out of his misery!)”

“Agreed. These last two bond films were far too dour and sexless.”

“Confession: I do not like Craig as Bond. I have never had the urge to rewatch any of those movies.”

“Yeah, I’ve never much liked Craig’s. He’s just too gruff, thuggish, and charmless. I think the movies have been interesting but it’s essentially been the British Bourne Identity.”

“This guy is such an asshole. And a lousy actor to boot. He hasn’t changed his expression in ten years and every non-Bond film he makes bombs. He has all the charisma of a dead squirrel. He should count his lucky f**king stars.”

“How about that stupid pucker mouth sour puss he always puts on.”

“Bond gone Rogue is a writing problem, not Craig’s. But I’d agree that I kinda miss the debonair of Connery or Brosnan.”

“For real, Craig always looks very uncomfortable in the suits and tuxes.”

“I do not get his appeal. Even going back to LAYER CAKE and other pre-Bond s**t. I don’t get it.”

“If only he’d made the decision that he didn’t want to be Bond before he took the role.”

“Honestly, Sam Mendes is a pretentious, clueless twat and that’s why. I can’t stand the heavy handedness that permeates his work and feels extremely false. He’s like a shitty Darren Aronofsky with the tone he tries to achieve. It’s as though he thinks brooding and sad sack = deep, but it’s simply because he doesn’t have the confidence to make it fun. He’s the kind of guy who can never nail the tone and the true realism and character studies of people like Sidney Lumet no matter how hard he tries cause he doesn’t get it. He’s not open to tell stories the way he thinks he’s telling them and failing miserably at… his films are closed off and inert, and that’s why they’ll be forgotten.”

“Time to fix the franchise and return to brassy gadget romps. Craig’s films should be burned, and all those involved forced to apologize for their rape of the franchise.”

“No offense to Craig, but why the venting over a revered property? Couldn’t he just as easily said: I need to move on with my career, it’s a younger man’s game, etc?”

“Why the need for all the negative references? Let alone say “it’s all about the money” even if we know it to be true ….”

“Get Fassbender on the phone.”

“On the plus side, if Craig quits making Bond films now, then at least we won’t have to see him at fifty-seven wheezing through action scenes and using a bunch of stunt doubles like Roger Moore did in A View to a Kill.”

“I don’t f**king care who you cast. I honestly don’t. What I do care about is: can we please have a story about Bond doing some actual spy s**t, without the usual bulls**t additions and twists on the spy genre or confining the whole f**king movie to one hotel. I am not interested in Bond’s psychological and emotional trauma, nor in seeing MI6 turn against Bond and now he’s on the run. f**k off with that bulls**t.”

“SKYFALL had a Home Alone style conclusion where it’s Bond and an old lady at his childhood home. That movie f**king sucked. Next movie maybe his parents will pop up at the end to put a hole in the bad guy’s forehead with some MacGyver s**t. WOn’t that be memorable and worthy of the greatest spy franchise. I honestly think this is the low point of the entire series, the end of SKYFALL. I feel like the whole world is on drugs from the positive reactions to that dumb f**king movie.”

“If the next Bond films are going to suck the life out of the 007 Franchise like Skyfall did. Then yes, cash your last check and run.”

“If you like your Bond watered down, boring with little action, no gadgets , no sense of humor, failed missions and lame then buy ‘Skyfall’ on Blu Ray and enjoy.”

5 comments for “Bond or Death? Craig answers the question nobody asked.”