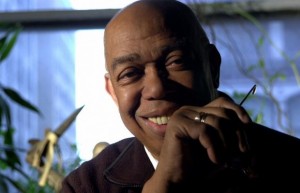 Another sad day for Bond fans. Geoffrey Holder, who played Baron Samedi in Live and Let die, passed away last Sunday at the age of 84. Geoffrey was an undisputed talent who leaves behind an incredible legacy. Our Thoughts and prayers go out to his family. 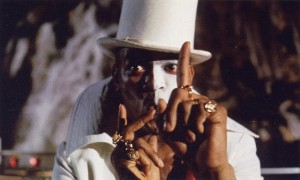 Special thanks to Kris for posting the story.

Discuss this in out forum.

Geoffrey Holder, the dancer, choreographer, actor, composer, designer and painter who used his manifold talents to infuse the arts with the flavor of his native West Indies and to put a singular stamp on the American cultural scene, not least with his outsize personality, died on Sunday in Manhattan. He was 84.

Charles M. Mirotznik, a spokesman for the family, said the cause was complications of pneumonia.

Few cultural figures of the last half of the 20th century were as multifaceted as Mr. Holder, and few had a public presence as unmistakable as his, with his gleaming pate atop a 6-foot-6 frame, full-bodied laugh and bassoon of a voice laced with the lilting cadences of the Caribbean.

Thus did Mr. Holder make his Broadway debut on Dec. 30, 1954, as a featured dancer in “House of Flowers,” a haunting, perfumed evocation of West Indian bordello life, with music by Harold Arlen and a book by Truman Capote, based on his novella of the same name. Directed by Peter Brook at the Alvin Theater , it starred Diahann Carroll and Pearl Bailey, and among its dancers was a ravishingly pretty young woman named Carmen de Lavallade. She and Mr. Holder married in 1955, had a son, Léo, and sometimes shared the stage. Both wife and son survive him. Boscoe Holder died in 2007.

One character Mr. Holder played in the musical was the top-hatted Baron Samedi, the guardian of the cemetery and the spirit of death, sex and resurrection in Haitian Voodoo culture. Mr. Holder relished Samedi: he played him again in the 1973 James Bond film, “Live and Let Die” (the first of the Bond franchise to star Roger Moore), and featured him in his choreography — in his “Banda” dance from the musical “House of Flowers,” and in “Banda,” a further exploration of folk themes that had its premiere in 1982.

His Voodoo villain in “Live and Let Die” was of a piece with much of his sporadic film career: with his striking looks and West Indian-inflected voice, producers tended to cast Mr. Holder in roles deemed exotic. In “Doctor Dolittle” (1967), he was a giant native who ruled a floating island as William Shakespeare (the 10th). In Woody Allen’s “Everything You Always Wanted to Know About Sex * but Were Afraid to Ask” (1972), he played a sorcerer. In “Annie” (1982), he was the Indian servant Punjab. (An exception was the 1992 romantic comedy “Boomerang,” in which he played a randy director of commercials working for Eddie Murphy’s playboy advertising executive.)