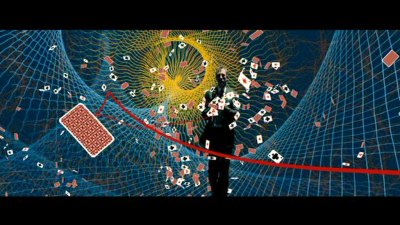 Having spent a considerable amount of time over the years thinking and writing about the Bond legend, I don’t mind admitting that I’ve had a devil of a time since this past November, trying to figure out exactly where Daniel Craig and Casino Royale fit into the almost mythical, iconic James Bond canon. Watching this supposedly radical revamped reboot of the franchise, there are so many instances of back-and-forth “yes, that’s right,” and “no, that’s completely wrong,” elements and sequences in the film, that by the end of its exhausting, too-long 144 minute running time, I wasn’t exactly entertained as much as I was a nervous wreck. Unfortunately, deep flaws in the conception and execution of Casino Royale keep it from being one of the great works of the Bond filmography.
….
The whole movie suffers this way, from a cramped, dark production design that imparts no awe or “gee whiz” appreciation that “Bond look” designer Ken Adam effortlessly achieved (quite a shock here, too, coming from long-time Bond production designer Peter Lamont). Bond is supposed to inhabit a world we will likely never see, a world of luxury that he’s not really entitled to enter either, except for the fact that he has a license to kill that grants him entrance to these forbidden pockets of excess. So where is that sense of scope in Casino Royale? It’s frankly an ugly film to look at, with little or no sense of style to its lensing or compositions. Again, one gets the feeling that everyone involved didn’t want “pretty pictures,” that those big sets were somehow artistically “dishonest” in a world that now sees Bond’s exploits as outlandish actions that need an apology. What a shame. I’ll take the “dishonesty” of Blofeld’s volcano lair in You Only Live Twice any day over the depressing, dark, small look of Casino Royale.