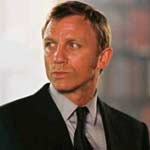 DANIEL CRAIG is urging movie bosses to revolutionise the
JAMES BOND franchise by including a gay scene involving the
superspy in the follow-up to CASINO ROYALE. The heart-throb
actor has also reportedly told studio chiefs he is prepared to
film a full frontal nude scene to please both his male and
female admirers. He says, “Why not? I think in this day and
age, fans would have accepted it. “I mean, look at (British TV
series) DOCTOR WHO – that has had gay scenes in it and no
one blinks an eye.”
]]>