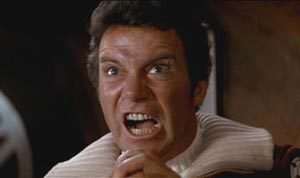 For some reason Alternative 007 were not invited to the
press screening of Casino Royale. We have no idea why.
Our invitations, I can only presume, were lost in the
post. Anyway, Casino Royale. The reviews for this film
were so hysterical that even Craig naysayers must have
started to suspect they were missing out on the
cinematic event of the year and Eon’s version of The
Godfather part II by staying away. Some big doubters
flipped on seeing this film. I must confess that I was
seriously intrigued to see what all the fuss was about,
although slightly wary of the ‘I usually hate James Bond
films but…’ sentiment. Of which more later.

The pre-credit sequence was, well, shown in the trailer.
There was nothing new to see. Daniel Kleinman’s titles
were absolutely horrendous. I love his previous work
but in his attempt to generate a timeless retro feel he
somehow recreated the interior decor of a 1970’s Indian
restaurant. No girls this time but Danny Craig’s lovely
mug jumps out of the screen at the end. Yes.

Le Chiffre. Count me in as someone who doesn’t think
the villain cut it in this film. Fleming based Le Chiffre on
Alistair Crowley but Mads underplays it and looks like a
middle-aged goth. I struggled to understand some of his
dialogue which came out sounding very Dutch.

The parkour chase. I got a kick out of seeing the French
bloke do his free-running stuff. District 13 packs more
of a punch but it was nicely done, although the moment
where Craig and Foucan exchange telegraphed karate
chops on top of the crane is one of the lamest things I
have ever seen in a James Bond film. The Embassy
scenes were Campbell as his generic action hack worst
and wouldn’t have been out of place in a Cannon Chuck
Norris film. I should say though that Campbell and his
Director Of Photography do at least give this film a
decent look with a bit of colour.

It soon becomes clear that this isn’t the James Bond we
know. He is stupider and more reckless. This is
explained by him being a new novice ’00’ although he
certainly doesn’t appear to be any younger than the
other actors were in their debut film. One could actually
say he looks older. Judi Dench treats him like a teenage
hooligan (when his ‘chip’ was fitted I actually thought it
was a metaphor for the whole problem of juvenile
offenders and electronic tagging). Craig’s Bond wouldn’t
have lasted five minutes with Bernard Lee but here is
free to wander around of his own accord until they need
him.

The Bahamas. Craig emerges from the sea looking like a
duck in a mildly surreal homoerotic scene. It won’t be
the last in the film. He cops off with Solange and then
wins his Aston Martin in a card game. I like the idea that
Bond got his car off Q but ho-hum. The Miami Airport
scene. Hey, Post 9/11 Bond! How clever. As uneccesary
as the ski chase in The World Is Not Enough this
set-piece simply fails to deliver. It’s supposed to be
Miami but (shot in the dark) could be anywhere and
probably is.

Now we move into the book. Eva Green, who I was led
to believe was a great actress, was exposed as
something of a stock Euro bimbo. She has a cold and
slightly enigmatic quality but so did Rosamund Pike in
the last film and I don’t remember hearing anyone
compare Pike to Diana Rigg. Comparing Green to Diana
Rigg is equally silly. The poker scenes go on forever
with several artificial distractions to stop the film
grinding to a total halt. Bond is drugged and attacked by
a lunatic with a knife although the shower scene is well
done and Jeffery Wright deserved a lot more dialogue as
Felix. Kudos to David Arnold for not laying on too much
syrup although his score wasn’t that memorable.

Vesper is kidnapped and Bond gets in his car. The
expectation rose in the audience. A car chase! No, sorry.
No car chase. Craig (here looking for all the world like
ex-Chelsea footballer Dennis Wise) flips his car over
267 times and is captured. The torture scene. Is it
torture to watch? Yes, it is for me because the Daniel
Craig from the supermarket scene in ‘Some Voices’
emerges. I am a respected British character actor and
thespian and I will gurn and overact if you give me the
chance. What else is he supposed to do in that situation
you ask? I have no idea but somehow, call me eccentric,
I never expected that schizophrenic/chef character from
Some Voices to ever turn up on my local cinema screen
playing James Bond. I think they call that cognitive
dissonance.

Bond suddenly decides he loves Vesper (with about ten
minutes of the film left). Departing from the book once
again she drowns herself in a lift after a blah action
set-piece in Venice. Craig says the line and the James
Bond theme sounds completely incongruous and out of
place. Why? Because this is not a James Bond film.

Casino Royale is a Bond film for people who think James
Bond films are by and large shite. Mark Kermode said it.
Vern said it on Aint It Cool. I love James Bond films and
I thought Casino Royale was joyless, often boring,
over-rated and completely lacking in Bond ‘residue’.
This film is unlikely to become a staple of bank holiday
afternoons in the years to come and that is exactly how
these miserable gits who haven’t liked a Bond film for
about 75 years would have it. And no, I didn’t think Die
Another Day was fantastic and don’t want Bond films to
be a innuendo-laden cheesefest. I love OHMSS and The
Living Daylights but was left cold by this. Everything
that separated Bond from the pack has been scrapped
right down to Bond himself. The history established by
the franchise was dumped for a couple of ironic jokes
and Michael G Wilson’s 20 year dream of a Bond origin
film. I look forward to the origin film Michael. Call me
pedantic but I hardly think a three minute sequence of
Bond shooting someone qualified as an ‘origin’ film.
Batman Begins was an origin film. The original
Superman was an origin film. The tuxedo scene was
beyond me. Bond tries on a tux and looks in the mirror
as if…what? Has he never seen one? Is the tux
supposed to be like a superhero costume or something?
Here’s an idea for a James Bond origin film: cast a
young actor who looks like James Bond! Was that too
difficult? But no, someone says, Daniel Craig is
Fleming’s haunted, abandoned Bond from the original
novel. He is? He doesn’t look like him. Craig’s Bond
doesn’t even look like a Martini drinker. He looks like a
man who drinks his lager straight from the can.
Someone said that Craig gave a glimpse of how Lewis
Collins would have played Bond. Sardonic, amused at
himself, dialogue snapped under breath. Not far off the
mark except of course Lewis Collins actually looked like
a James Bond. Craig, with his waxed fruit countenance
and creepy smirk looks like the sort of chap Roger
Moore would karate chop and throw off a roof. Mentally
I never accepted him as Bond. Very early (about the
time he walked up to the camera with that gormless
pout and took his sunglasses off) I went into a mode of
trying to watch it as an action flick and forget it was a
James Bond film.