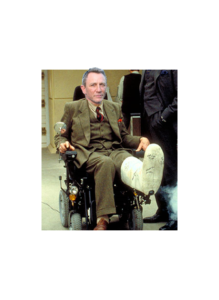 May 15, 2019, a profound historic event was reported on all the major news wires, namely that Daniel Craig fell down and went boom. Thankfully it appears Dan wasn’t badly injured, depending on who you ask, he’ll be returning after a one to two week recovery, so I can joke, but it serves as an apt metaphor for the production at large. This film starts running down the set when suddenly the rug gets pulled out from under it causing it to flop flat on it’s face.

Fortunately since the injury wasn’t as bad as feared the producers were able to abandon the re-re-re-rewrite they had already started filming. 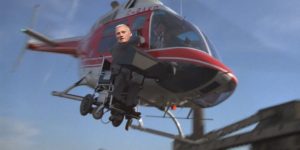 Apparently, according to a source who spoke anonymously;

“(Craig) was sprinting during filming when he slipped and fell quite awkwardly. He was in quite a lot of pain and was complaining about his ankle. As you’d expect he was also pretty angry that it had happened. He threw his suit jacket on the ground in sheer frustration.”

That was taken from the Daily Mail the only one I can find still quoting the bit about the suit jacket, more on that in a minute. Call me cynical and suspicious, but I have to wonder about the veracity of the injury. Now Craig is known to be accident prone not to mention the fact he’s at the age one needs to start worrying about osteoporosis, so all that may be true. However here is why I’m a bit suspect, first Tom Cruise suffered a similar injury in his latest film of the Bond competitor Mission Impossible series. Next we must remember Craig’s propensity to rely on stuntmen fitted out in rubber masks bearing his likeness, so it’s hard to believe he was taking any unnecessary risks, unless he really did bang himself up while running in a straight line. Despite the well documented use of craggy masks on the last picture many publications are buying the EON P.R. line and trying to paint Craig as a live-wire who performs all his own stunts, again like Cruise. 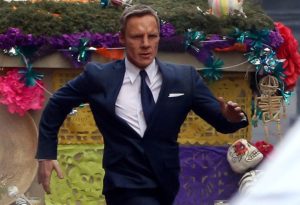 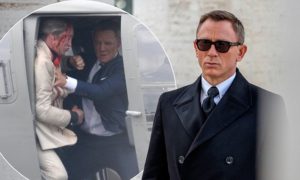 Finally, we come back to the jacket comment. Craig supposedly injured himself in Jamaica where he would have no call to be wearing one. None of the behind the scenes spy shots show Craig wearing a jacket of any kind, suit or otherwise for him to have on in order to “throw on the ground in frustration.” Yes that could be a mistake on the part of “the source,” but all that coupled with the shifting recovery time and I can’t help but wonder if this is some sort of publicity stunt. An effort to draw some sort of comparison between the craggy one and the infinitely more popular (and crazy) Cruise, especially when you consider the lukewarm reception this fiasco of a film is receiving. 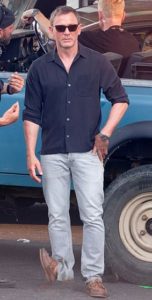 Craig, post accident, getting lessons on the finer points of putting one foot in front of the other by a stunt coordinator, whom we can only assume is enamored by Craig’s “badass” stunt work.

In more important news from the set, EON has hired an “intimacy coach” to help Craig and Ana De Armas navigate their sure to be awkward love scenes. More news worthy than Dan’s inability to convey romance is the fact this confirms, as if there were any doubt, Seydoux’s Swann will be dead before the opening credits. He can’t be making love to De Armas’ as yet unnamed character if the center of his universe is waiting in the next room to ask more questions for her monotonous psychological questionnaire.

Supposedly the coach is there as a part of some progressive claptrap to put the actors at ease, from the Sun:

“An intimacy coordinator is now on set during those scenes and is working with Daniel Craig and new Bond girl Ana De Armas to run through the script and make sure they feel comfortable. It’s really progressive and is a step in the right direction – not just for Bond but the industry as a whole.”

Ironically the Sun article I found this on had several nude photos of Miss De Armas. As well as a copious amount of photos featuring her in various states of skimpy dress which she posted online herself! So obviously someone who is uncomfortable with the prospect of the PG rated exposure seen in Bond films!

It seems the “intimacy coach” would be better used on Craig and his director Cary Funkunaga. Apparently there was trouble in paradise between the two on set, giving another possible explanation to the origin of Craig’s injury. 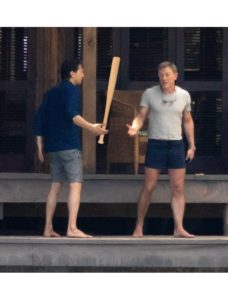 I wonder if Danny is still Cary Funknwagnel’s “favorite Bond” after putting up with his notoriously difficult demeanor on set.

Also, questions have been swirling as to whether or not Craig is done after this film. The controversy comes from comments made by Naomi Harris who spoke on the subject, quoted from the Express:

Speaking with The Independent, she said: “Daniel has never said that [Bond 25 is his last film], so we don’t know.”

“Genuinely I think he doesn’t know. Nobody does.”

As the Express points out further down in the article, Craig has absolutely stated on several recent occasions this is indeed his last one. However I would not be surprised if he did come back, after all he’s got nothing else going for him. Nowhere else is he going to get the paydays he’s collecting from EON. So if Babz is willing to hand over each and every concession Craig asks for and there’s no reason to believe she wouldn’t given how smitten she is with him, he’ll stick around phoning it in both collect and long distance.

She continues, “It depends on this film and if people turn out and are like, ‘We want Daniel’ – which I think they will – then he may well be back for another one.”

I don’t think he’ll have that problem, people are already turning out like, “We’re tired of Daniel and don’t want him for this one let alone another.” The hot air is out of the Daniel Craig balloon.

In news of other franchises, John Wick 4 has just been green lit with a projected release date of 2021, that’s two years from now! EON used to know how to put out films in that time frame, until they got so far up their own backsides with “art” or whatever they believe passes for it. Look, I know Wick films are more about violent ballet than great story, but can you point to a Bond film in the last 20 years with a better story than any of the 3 Wick films? Certainly none of those Bonds have been any more entertaining to the action oriented audience. I’m not advocating Bond go in the Wick direction and start making “gun porn,” but if they don’t get their act together soon they’ll be overtaken by all the up and coming series flying up from behind them, if they haven’t already. I’ve said it before, I’ll say it again, EON does one thing make Bond films. Yes, I know they made that one movie “Film Stars Don’t Die In Liverpool.” Shortened from “Cinema Actors Whom Receive Top Billing Do Not Expire In A Northwestern English City Primarily Known As The Birthplace Of The Rock And Roll Band Called The Beatles.” They are also supposedly working on another film called the “Rhythm Section” as to if, or even when it will actually be released nobody knows or really cares. The point is no one cares about EON’s other projects, they only exist because of Bond, if they want to try their hand elsewhere fine, but take care of where your bread is buttered. Stop slapping together a load of garbage last minute expecting the unwashed masses to swallow it wholesale. Unlike Wick 2,3 and 4 you knew you were making another picture the second the last wrapped, why not get to work on it right away and do it right? Yet here they are four and a half years later and they’re writing the script as they shoot, hell they haven’t even got a title for the damn thing yet!

8 comments for “Break A Leg (and other odds and ends)”