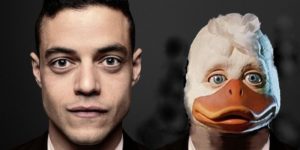 Is EON grooming Rami Malek to play Howard the Duck in an Oscar bait biopic about the titular mallard?!

In the recent press junket (emphasis junk) the cast for the as yet unnamed Bond 25 was confirmed. I wonder why not just stick with “Bond 25” as the title? It has just as much creativity in it as the rest of the film, but I digress. The biggest news in that presser was the confirmation of the worst kept secret in EON history since Christoph Waltz was cast as Blofeld. That would be the addition of Rami Malek to the cast of our new favorite cinematic disaster.

Mr. Malek is the most recent in a string of Oscar winners to play the villain in a Bond film. Rami has had a sudden and meteoric rise lately going from basic cable television rounder to Hollywood powerhouse due to his lead role in the biopic of Queen front man Freddie Mercury. In fact negotiations were held up until after the Oscar awards to see if he walked away with the statue. It seems the golden naked little man is a prerequisite to chew scenery in an EON film these days. I can’t help but wonder if EON would have withdrew any offer that may have been on the table had he lost.

The Oscars in my opinion have become a bloated, over rated mess anyway, if there ever was a time such wasn’t the case. Really, ask yourself what was the last best picture winner where you sat back and said “Yes, they got it right on the nose with that one!” Certainly not  in the last quarter century, but again I digress.

Mr. Malek seems an affable fellow and since I’m not familiar with his work, due to the fact I’m not a huge Queen or biopic fan, nor a purveyor of basic cable, I won’t comment on the quality of his craft. However going by the track record of EON’s previous statuette awardees it does not bode well.

Previously Christoph Waltz giggled, cackled and cuckooed his way through SPECTRE, when he wasn’t slagging off the series as nothing more than “Punch and Judy shows.” I suppose in his mind we should be grateful for the fact such a great thespian as he, lowered himself to cash EON’s check and phone in a performance far greater than such drivel deserves (although considering the script, maybe he was right). At any rate all that money spent on an Oscar caliber artiste was wasted when he gave a performance that would have made Cobra Commander of the G.I. JOE cartoon series cringe with embarrassment. 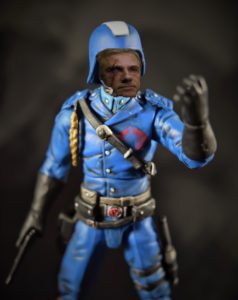 Before Waltz we were graced with his lordship Javier Bardem, another acting trophy beneficiary, who did us all a favor by incorporating every offensive male hairdresser stereotype into one character and then mincing that creation across our screens for 90 minutes. Hardly money well spent, but I suppose because he did well when he was starving and more eager to prove himself, we’re supposed to look past this. 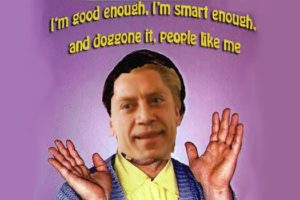 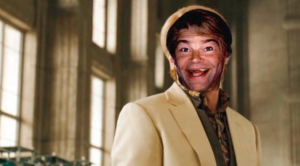 Will the real Raul Silva please stand up.

Earlier than all these though was the granddaddy of them all, the one, the only, Mr. Christopher Walken! The great white shark of scenery chewing, a man who makes velociraptors appear toothless by comparison. The difference being in Walken you know what you’re getting. He’s made a career out of unhinged, deranged diatribes, which made him perfect for the megalomaniac sociopaths Bond films are famous for. Unlike Waltz tittering in his sockless loafers or Bardem camping it up more than an Eagle Scout, Walken actually gave a Walken caliber performance. For better or worse you got what you paid for in him.

Let’s step back and look at the two Craig villains played by men who didn’t win golden accolades from a bankrupt academy, Mads Mikkelsen and Mathieu Amalric. These two C level actors thanked their lucky stars to have been cast in such high visibility projects as Bond films and for better or worse threw themselves into the roles. Mikkelsen by far has given the best performance in a Craig film. His Le Chiffre is the most subdued and polished baddie of the four, quietly in control with a simmering fury bubbling underneath. Amalric on the other hand is far less restrained in his portrayal, but at least you can tell he’s trying. Look at all the effort he put into character development with is costar, as pointed out a few rants ago:

“Amalric and Taubman improvised a backstory for Elvis: he is Dominic’s cousin and once lived on the streets before being inducted into Quantum.”

It was pointless, but at least he took the film, bad as it was, seriously!

As for Mr. Malek, I hope he does better than his recent predecessors. Not for EON’s sake, but his own. As I said, he seems an affable fellow and I’d hate for his career momentum to come to a crashing halt because he put some misguided trust in Babz and her motley crew of hacks. One thing Rami has going for him, he’s not a pretentious self-absorbed egomaniac, at least not yet, and film acting has a way of doing that to you. He hasn’t built up the catalog of masturbatory, self-congratulatory accolades that makes one better than the roles they’re offered. This means he’ll still be hungry enough to put in an effort on such a “lowly” project as a Bond film, unlike the two prior villains who thought mugging at a camera and cashing the check would be more than enough to satiate the rubes who tune in to such tripe as James Bond. They just cackle and coo because that’s all the films are worth to them, a junk series to which they’re doing a favor in exchange for hefty paydays.

I hope against hope EON will make a course correction returning to talented but lesser known journeymen actors, directors and writers who will see the project as a chance to show what they can do on a grand scale and out of gratitude for the opportunities afforded them pour their hearts and souls into the films. However in reality we’ll just get more halfhearted kitsch from disinterested figurine recipients delving into camp, for that’s all it’s worth to them.