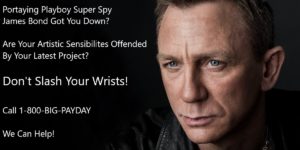 This is the official synopsis of the forthcoming Bond 25:

“Bond has left active service and is enjoying a tranquil life in Jamaica. His peace is short-lived when his old friend Felix Leiter from the CIA turns up asking for help. The mission to rescue a kidnapped scientist turns out to be far more treacherous than expected, leading Bond onto the trail of a mysterious villain armed with dangerous new technology.”

Unfortunately is seems our old friends Neal Purvis and Robert Wade (P&W) the dynamic duo who’ve had a hand in every Bond film since The World Is Not Enough (TWINE) are at it again, placing Bond on the outside looking in. Yes, starting with TWINE, P&W have placed Bond outside the realm of his occupation, whether through injury, capture, suspension, vengeance, desertion or acting on unsanctioned orders from his previous supervisor, Bond has operated as a rogue warrior in one way or another since these two have become entwined with the series.

Early on in my rantings and ramblings I did a rather admittedly amateurish (as opposed to what I do now?) outline of these two. Wherein I accuse them of unoriginality by using the same framework for all their films, considering the fact these two have only written 6 non EON projects in nearly 30 years, the largest of which was Johnny English, I can’t be far wrong. Bond is never going to move beyond stagnation until these two crumbs finally get swept off the table at EON. The story is the most important part of any film and EON invests the least amount into it. Yet they don’t bat an eye at shelling out millions to auteur directors and bored, disenfranchised actors who’d rather be anywhere else. EON needs to ditch these two and inject fresh new blood into the franchise whether it is in the form of competent proven authors with a track record for compelling action/adventure films, or audition young up and comers to see what fresh ideas they can bring, anything’s got to be better than this status quo!

It’s funny these two have decided the machinations of Craig’s outsidership this time around would be retirement. Craig, who looked old beyond his years when initially cast, looks every bit the average pensioner today at 51. He was already too creaky and withered by his third movie Skyfall, to pull off the “young amateur agent” he was supposed to be portraying the two films/one mission previous. Also consider, if and when he does finally stop torturing us with his version of “Bond” he will effectively be retired from film due to his lack of roles. It seems old Danny boy has made himself insufferable in Hollywood, the roles which initially came pouring in once he was inexplicably miscast as Bond, have all but dried up due to his noxious behavior on set and more damning to the production bean counters, the fact he’s box office poison.

So, a sad film for the miserable actor starring in it, Craig should have been given the boot right after SPECTRE, especially after his infamous “slash my wrists…just for the money” comments. Add to that the swirl of excitement surrounding all the speculation as to who would be replacing the dower thespian and you have to wonder why the powers that be at EON bothered to throw the mountains of cash they surely showered on the beatified actor to return to the role he so truly despises?! 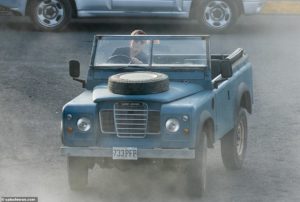 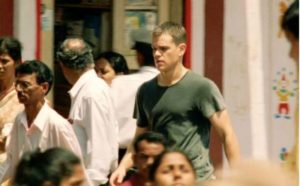 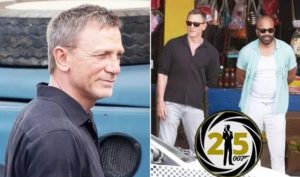 So Craig will be bumming around a beachfront resort town wearing a black shirt (very smart in the sweltering Caribbean) and some acid washed “dad jeans” whilst driving a rundown SUV, very much like the beginning of the second Bourne film. When a ghost from his past appears, to tear his new found tranquility apart… like the start of the second Bourne film. However this is a friendly ghost in the form of Felix Leiter asking him to help on a job. “Just when I think I’m out, they pull me back in.” A tired trope to be sure and one it seems EON is unafraid to dig up and resurrect for this intellectually bankrupt film.

Judging by the preproduction work, I’m sure we’ll be treated to the tortured flashbacks of Lea Seydoux’s Madeline Swann, such as the time she killed her father’s attackers as alluded to in SPECTRE… just as in the beginning of the second Bourne film. For those of you who forgot, or mercifully didn’t hear, Miss Swann killed some men who came to murder her father, in a story which I have neglected to point out previously, is eerily similar to the one told by Olga Kurylenko’s Camille Montes in the oft overlooked Quantum of Solace.

As stated above, Craig will be trying to rescue a captured scientist, another well worn, threadbare trope EON reanimates like Dr. Frankenstein. But all is not as it appears which judging from all of P&W’s previous Bond works will take the form of a double agent. 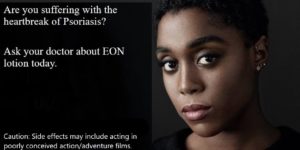 At some point ether early on or a bit later Madeline Swann will be killed off. I’m assuming early, perhaps so Craig, who may initially rebuff Leiter can return to the fold to enact some sweet, sweet revenge for her death. Further evidence to this comes in the form of Bond’s house being a small, special made set for the picture rather than an existing edifice already in existence and conscripted for the film. I imagine it will be blown up or otherwise destroyed before the opening credits roll.

Since Craig will be all mopey and depressed (for a change) he won’t be in the mood for love we can assume. So I’m guessing Miss Ana De Armas will be the villain’s moll, the left over Irma Bunt character from the leaked SPECTRE script maybe?

Rami Malek playing the “Mysterious villain armed with dangerous new technology” will, I can only assume, be very much like Jessie Eisenberg’s Lex Luthor, a Mark Zuckerberg type entity or similar to the techno dupe portrayed in the fifth and most recent Bourne film. As to the “dangerous technology” I’m guessing it will be some form or another of impossible internet software which will spy on or otherwise harm the user… like in SPECTRE… or the first Kingsman.

Any way you slice it this will be a very predictable lame duck film for its lame duck star to (hopeful) bow out on!

14 comments for “The Plot Thickens?”