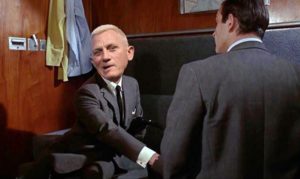 Previously I wrote about two different love scenes, one from Goldfinger and the other from SPECTRE. I thought this time I would take a look at the two actors in those scenes, because on the surface they appear quite similar.

They both came from humble roots, Connery from the rough and tumble streets of Edinburgh, Scotland and Craig claims the hard scrabble streets of Liverpool, England as the setting for his impressionable years (the truth to that claim is disputable).

Both men served in the British Merchant Navy and both took various menial jobs early on. Connery delivered milk and polished coffins, whereas Craig ever one to be unoriginal, waited tables between acting gigs.

Both men have a history of bodybuilding. Connery parleyed his physical fitness into a third place finish in the Mr. Universe competition and further into getting himself cast as Bond. Craig presumably with the help of Sylvester Stallone’s chemist, pumped himself full of muscles once he was hired as Bond.

All kidding aside, Connery is renowned as a salt of the earth sort of fellow and Craig has dropped more F-bombs than the Royal Air Force in the entirety of World War 2. The difference is in how these two men harnessed their uncouthness into each’s portrayal of Bond and it all comes down to direction.

Connery had the benefit of being taken under the wing of Terence Young, who was an actual gentlemanly rogue. He took Connery to his own tailor, his own shirt maker (Anthony Sinclair, Turnbull and Asser respectively, two brands which have become inextricably intertwined with Bond) and most importantly showed Connery how to behave like a proper gentleman. Young famously went so far as to have Connery sleep in his suits so as to grow comfortable in them. Connery’s natural roughness coupled with Young’s genteel tutelage combined to create the perfect cinematic interpretation of Fleming’s creation. With the Connery/Young Bond you get a sense of a hardened, tough individual under a refined, polished gentlemanly veneer, because that was precisely what he was.

Looking at Craig one has to wonder what if any direction he was given. It would seem as if he was only told in the pre-production of Casino Royale, “look pissed off and snarl/mumble your lines” and he’s done so ever since. Craig’s first Bond director was Martin Campbell who had launched Brosnan’s Bond career. Whereas Pierce didn’t need much direction in suave, making Campbell’s job simple in that regard, Craig should have had a team of tutors. In Craig’s debut as the world famous gentleman spy, he was coached on all the spy traits such as, how to grow his physique, how to properly perform his stunts and how to smash through a wall with the greatest of ease. However, no one paused a moment to consider the gentleman aspect. Craig waddles around like a boy in his father’s suit snapping his lines one minute and mumbling the next, he comes off less dangerous gentleman and more fragranced gym rat, who would be more at home in a “Tapout” T-shirt than a Savile Row suit, hardly the attributes Fleming assigned his famous aristocratic secret agent.

It’s ironic as Craig in reality comes from much less humble beginnings than Connery, despite the appearances he claims. Craig was born in Chester a small town in the northwest of England to an art teacher mother and a father who was a landlord to two pubs. Hardly humble beginnings, yet he maintains he ran in the mean streets of London’s east end because he attended drama school in that city. In reality Craig is an upper middle class drama nerd playing hard at rough and sophisticated while failing at both. On the other hand Connery was really a man of the streets who was taught to be a gentleman and Bond succeeded because of it.