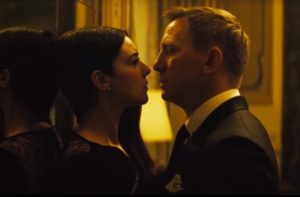 Connery’s Bond has been accused in the past of being a bit “rapey”, most point to his seduction of Honor Blackman’s Pussy Galore in Goldfinger as the ultimate example. Let’s take a look at that scene and compare it to another more contemporary love scene.

After Bond is found under Goldfinger’s model, the nefarious bullion merchant asks his sultry aviatrix Miss Pussy Galore to “slip into something more suitable” in order to show Bond a good time, which in turn will convince Felix Leiter, who is watching with field glasses, that Bond needs no assistance.

Bond and Galore enter a barn where he tries to ascertain her true allegiances. She executes a judo throw which sends Bond flying, Bond responds by tripping her. After a few more judo holds and throws, Bond ends up suspending himself over Galore in a push-up like position. He begins to lower himself down to Pussy, she initially resists by pressing back on Bond’s shoulders, as his lips reach hers, she relents and embraces him. It’s the no, no, no… yes, yes, yes trope that was popular at the time

Many take exception with this scene because Bond “forces” himself on Pussy by using his body weight to overcome her “resistance” to his sexual advance. We must remember, Pussy is complicit in a scheme which would kill over 50,000 innocent people in order for Goldfinger to detonate an atomic weapon. All so he can gain value on his glittery commodities. I’m not saying she deserves to be forced into any compromising positions, but considering the stakes at hand Bond trying to “appeal to her maternal instincts” doesn’t seem quite so heinous. Not to mention, who’s to say Bond would have gone any farther had she not reciprocated.

Viewing this scene through the prism of modern values it certainly is “problematic” as the kids say these days. However, this is the hyper fantasy world of 1960’s Bond, when the world as depicted in television’s Mad Men was in full swing. I don’t bring this scene up to condone, legitimize or apologize for this behavior; I simply do so in order to juxtapose it against this other scene…

In the dark, medieval days of 2015 we witness Craig in SPECTRE with the widow Sciarra played by Monica Bellucci. Craig hassles the widow at her husband’s funeral before following her home, where Craig guns down two executioners who’ve come to send Mrs. Sciarra to join her husband in the great beyond. After such romantic introductions Craig is shocked, positively shocked the woman is not in a passionate mood! In a fit of rage he slams down two glasses of champagne he was holding. Craig uses his imposing frame to force Mrs. Sciarra up against a mirror and begins heavily panting while he kisses on her while she literally sobs! It’s never sufficiently established why Craig even bothers with her. Yes we know he’s looking for information, but why from her? Why is he molesting this woman when he could have and should have followed Waltz’ Brofled after the funeral.

Hers’s the difference between the scenes, in Goldfinger the “violence” between Bond and Pussy is playful and reciprocated. Pussy shows she is quite capable of taking care of herself and can physically handle Bond, to say nothing of the fact Goldfinger’s compound is crawling with guards who would respond at a moment’s notice were she to call out.

In Bellucci’s case however, it’s established she’s all alone, no one’s left to help her and the violence in the scene is harsh and jarring. When Craig slams the glasses to the floor they crash with a jolt to the audience. The scene is absolutely disturbing compared to the frisky one between Connery and Blackman. Add to this the tears rolling down Bellucci’s cheeks as Craig undresses her and one can’t help but wonder what in the actual hell was going through the film maker’s minds here?!

When push comes to shove it seems Connery’s Bond wasn’t any more “rapey” than the contemporary incarnation.