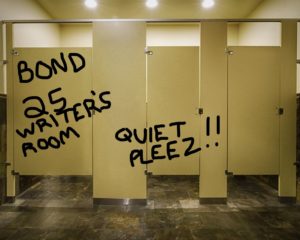 Scribbling on the Stall:

Apparently Paul Haggis is back to help pen this masterpiece alongside the dynamic hack duo of Purvis and Wade with the aforementioned Mr. Burns. You might recognize Mr. Haggis’ name from the highly over rated Casino Royale where he punched up P and W’s ham handed adaptation of Fleming’s last remaining unfilmed novel. You may also remember him from his failed attempt to go solo on the screenplay for Quantum of Solace, an effort apparently so bad it was deemed preferable to toss it in the trash bin during a writer’s strike and have the film’s director and star write an entirely new script on the fly while filming.

According to the article HERE, Mr. Haggis’ grand idea involved and I kid you not; Bond searching for Vesper’s lost child and abandoning it! So, obviously a man with his finger on the Bond mythos! One can’t help but wonder what fantastic ideas he’ll contribute this time around, especially since they’ve already jumped the carcharodon carcharias in the last film with brother Blofeld.

In other writing news, Bourne Ultimatum scribe Scott Z. Burns has been brought on board the Bond 25 writing team. I thought it would be an opportune time to take a look back at the Bourne series. This isn’t meant to be a comprehensive review of the series featuring Damon’s amnesiac spy, but rather a quick primer as it relates to Bond and their new writer. Bourne is rather a one trick pony. See Bourne run, see him fight, see him remember something, see him flee in a car chase and see him fight some more, lather, rinse, repeat.

I must admit, I rather enjoyed the first Bourne film. It was a new look at the genre, a spy film for the Blade and Matrix generation, but like those films it hasn’t aged particularly well. Don’t get me wrong, its aged better than some pictures of the era, but on the whole it has sagged a bit over the years. The film very much attempts to capture the Gen X angst of the late 90’s early 2000’s. Also the electro pop soundtrack (which I still personally enjoy, as I am one of those angsty Gen Xers) dates the film terribly. All together it’s not a bad action adventure film, nothing that EON needed to abandon their tried and true style to chase after, but a decent film none the less.

The second film The Bourne Supremacy was a respectable follow up. It leaned a bit too heavily on the first, recreating some elements of the earlier film. Such as quickly dispatching police officers (in this film the two holding him in Italy verses the two hassling him in a park in the original), Bourne fighting hand to hand with a fellow operative and using a desktop item as a weapon (a magazine here and in the first a ball point pen). This is also the film that introduces us to the infamous shakey cam.

The third film is where we’re introduced to Mr. Burns’ penmanship, and while he shares credit (or blame) with a few other authors it does not bode well for our favorite British spy. Bourne 3 is a carbon copy of Bourne 2. It may not be as egregious as Bourne 5 (Damon’s 4th), but it’s bad enough. Bourne uses a crowd to escape a sniper and CIA “grab team” as he does in the previous film, he also dispatches a fellow assassin mano a mano, once again using a bit of stationery to disarm the assailant, in this case a book. All this is bad enough yet forgivable; the final act however is where we really enter full blown imitation. Bourne is chased through the streets of a major city in a unorthodox vehicle by a large black SUV, just as the film before, ultimately ending the pursuit by crashing in a tunnel, just as before, points his gun at his pursuer and ultimately decides not to pull the trigger, again just as in the previous film. Bourne again gets his hands on evidence incriminating CIA management and turns it over to operative Pamela Landy. Damon even goes so far as to quote Clive Owen’s character from the first film, all in all not a very original film.

Glossing over the Jeremy Renner vehicle since everyone else did…

The fifth Bourne film, cleverly titled Jason Bourne or the Bourne Redundancy as it’s more commonly known, is just a two hour rehash of the previous three Damon films. It’s a testament to the staying power of Bond that he had lasted so long without becoming so stale. It also shows how terrible an idea it was for EON to abandon everything that separated Bond from such mundane offerings in order to ape a Johnny come lately, flash in the pan series.