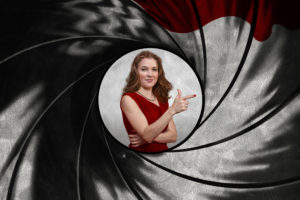 The “woke” militias of the Hollywood Illuminati have been beating the battle drums for a female Bond more and more recently. Even British Prime Minister Theresa May waded in to the fray to demand a lady Bond. Well, I’m happy to say Barbara Broccoli has finally put all this nonsense to bed by coming out and unequivocally stating Bond will never be female!

Bond must become a woman the marching cadence demanded. Which is funny as wasn’t it this time last year Bond must be black and the year before didn’t he need to be gay and before that some other such special group. The fickle finger of activist’s wags erratically, just as Occupy Wall Street gave way to Black Lives Matter, Black Lives Matter gave way to #Metoo and #Timesup, so too has the aim shifted on who “needs” to be Bond. I suppose some day when we are contacted by extra-terrestrials Bond must be Martian because green lives matter. Or perhaps when the dead begin to walk among us Bond will need to become a zombie because they were people too!

One of the arguments in favor of “Jane Bond” was James Bond’s terrible “misogynist” treatment of women. How would having a woman commit the same “repugnant” behaviors be any better? Jane would be treating men “poorly,” but I suppose that’s respectable because men “deserve” it? If she is a lesbian even worse, as she’d be doing exactly the same thing to women that male Bond does, but I suppose not having a penis somehow makes it better?

Then again, who’s to say we haven’t already had a female Bond, as we all know gender is fluid and who are we to assume what gender any particular actor was identifying as while filming any given scene! After all, maybe Connery was identifying as non-binary during You Only Live Twice? Perhaps Dalton was two spirit in License To Kill and Craig did appear in drag for that Woman’s Day Bond tie in!

Obviously I have taken exception to many of Ms. Broccoli’s film making decisions, particularly over the past decade. However she should be applauded, as a self-stylized feminist for standing up to the politically correct lynch mobs, especially at this time when her feminist friends and the world’s media have gone mad with man hatred, some for legitimate reasons and some less so. For her to come right out and say what obviously needed to be said is groundbreaking and maybe, just maybe, we could be witnessing the inception of a return to form for the old franchise.

4 comments for “Barbara Takes A Stand”