We thought it would be interesting to visit Daniel
Craig’s hate site, www.craignotbond.com, to learn what
the hell we were actually talking about yesterday. So
we did, and it’s with no little amount of shame that we
have to confess that his detractors somehow managed
to makes us root for him.

To their credit, it has to be said that the Craig-haters —
who primarily seem to be female Brosnan-lovers — did
not engage in some cheap, undocumented bashing of
the English actor — like some satire blogs would not
hesitate to. Their criticism is organized, humorous, and
sometimes even supported by articles from the New
York Times, which, granted, is to integrity what Hugo
Chavez is to sanity, but still. (For some perplexing
reason, neither of our 856 hilarious posts on Craig
made the cut. But we hold no grudge.)

Icing on the cake, the Brosnanophiles/Anti-Craigists
even offer pretty boy Daniel prospective roles he could
pursue if he were to voluntarily forfeit the 007 tuxedo:
Gilligan in the movie version of Gilligan’s Island, Charlie
Brown, Hannibal Lecter (no face mask necessary
apparently) or, our favorite, Mr. Potato Head. (Conflict
of interest disclosure: as powerful Hollywood
producers, we have been trying for some years now to
convince DreamWorks to greenlight a movie project of
Mr. Potato Head with Michael Moore in the title role, but
as the official statement goes, all parties “were
involved in other projects.”)

Back to the craignotbond.com site. Things got a little
weird when we discovered a little known fact in the
epic history of the latest James Bond casting: that Craig
was not first, second, third… eighty-ninth choice comes
as no surprise to anyone, but could any of you name the
88th pick? Rikki Lee Travolta.

Yes, we heard that same exact silence as we read those
3 words. So we googled the fella, and for your guilty
viewing pleasure, we proudly present you the man who
could have been Bond: 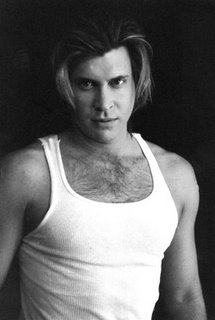 You’re more than welcome to join us in a collective
“What the f**k!”

You could shave Rikki Lee Travolta’s torso, give him a
manly haircut, dress him up in a $5,000 Brioni suit, put
an unknown French Actress fresh out of a boob job
operation and equipped with a brand new set of Cresty
White teeth and he would still look like the top choice
for a gay-themed biopic of country singer Billy Ray
Cyrus.

So finally, we came out of craignotbond.com exhausted
by the experience, unable to remember our email to
sign the petition to have Pierce Brosnan reinstated as
Da Martini Man, and with that curious taste in your
mouth you get when you realize that the Academy just
chose Jake Gyllenhaal instead of you as Best Supporting
actor.

And after brushing our teeth for 78 minutes non-stop,
71 minutes of which the Geneva Convention would
certainly consider as torture, we’re left with no
alternative but to support Daniel Craig. Because like the
saying we just made up goes: “You don’t like what you
have until you realize what you could’ve had.”